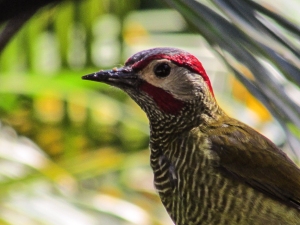 SVBC member Pat Morgan is the Grand Prize Winner of the Birdfeeder Competition for 2013 with a total of 25 species! At the end of December, she spotted a Golden-Olive Woodpecker, took this photo and jumped into First Place ahead of six other entries.

Gail and Harry Hull of Finca Cantaros are the Runners-Up with a total of 24.

Because the counts were so close both competitors will be awarded a prize at the SVBC Annual Meeting in February (date to be announced shortly).

Now is the time to start your Feeder List for 2014! Have your binos, a notepad and a pencil at the ready so you can record all species in accordance with the rules: the bird must either land on the feeder (or hanging fruit) or be seen feeding on fallen pieces on the ground underneath.  Ready? Set? GO! 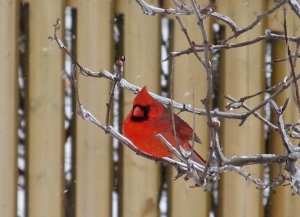 And just for a laugh, here is a species that probably won’t be seen on our lists any time soon.  Barb and Wally Barton’s niece sent it along to remind them of the frozen northland!

POW! Photos of the Week from SVBC Members.

Send us one or two of your favorite nature photos. We'll publish a few each week! Click here for details.