A most welcome letter from Jean-Philippe Thelliez (“JP”) and Christopher Stamp who visited us in April: among the most accomplished and energetic birders and photographers we’ve ever encountered: 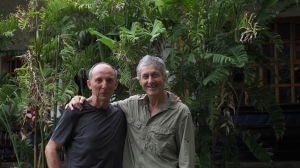 What a wonderful chance or was it destiny that put JP (Jean-Philippe) in touch with Peter?
Whatever it was, thanks to that contact one Frenchmen and his Franglais sidekick, Christopher, had the pleasure of meeting Peter and joining the San Vito Bird Club for its Sunday visit to the Wilson Botanical Gardens on the 6th of April.

What a wonderful experience it was. First, the warm welcome by members of the group, most of whose names are remembered (more than can be said for the names of the birds! Thankfully, others have recorded the names for us).  We have never been to a place where so many birds could be seen at the same time. It was impossible to capture them all on celluloid as they whizzed here and there and at the end we felt veritably shell shocked – rather like small children being let loose in a sweets factory. But we went back for second helpings!

The following day Peter took us up to Las Tablas with Marco Mora, one of the SVBC Detectives de Aves teachers. The Resplendant Quetzal and Three-wattled Bellbird were on the menu, among others, and we had good weather until the heavens opened on the trip back down but — fortunately, according to Peter — not until after we had already negotiated the slippery bits. 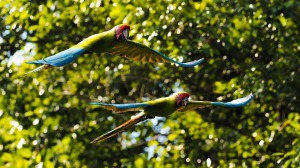 We enjoyed a couple of days exploring the Coto Brus area following Peter’s advice and met up again with Jeimiry Badilla from Finca Cantaros. He proposed a trip to his home near Cuidad Neilly on a holiday Thursday. So us two, Jei, his wife Marylin Saldana and their daughter Georgea were jimmied into our rented “Jimmy” for an exciting road trip.  What a trip! Jei and his wife are formidable birders; highlights of the trip were a Savannah Hawk, Lesser Yellow-headed Vulture, a nighthawk, three trogons and three manakins (we told you we couldn’t remember all the names…).

On the social side we apéroed chez Judy and chez Jo and Peter, where the latter kindly introduced us to their pet armadillo! We ate at Rancho Amigos with Alison, Jo and Peter; Peter then joined us at Liliana’s for a final meal and helped us plan the rest of the trip.

We thank you all — and especially Peter, who helped us with initial planning and without whom our Costa Rica safari would have been much less memorable and colourful in both human and avian terms.

Oh! and the San Vito Bird Club now has two new French members who would be delighted to welcome visiting SVBC members to share the French birding experience. I think the only bird that we have in common is the House Sparrow — Moineau domestique — but WHAT are you waiting for?

POW! Photos of the Week from SVBC Members.

Send us one or two of your favorite nature photos. We'll publish a few each week! Click here for details.